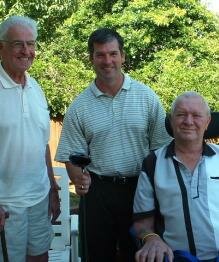 In 2005, Bruce Taylor who was recently diagnosed with ALS, met for a cup of coffee with PGA Golf Pro, Scott Fraser at his course, Glacier Greens in Comox.  They were joined by Rotarian Jerry Feniak..  He explained to his friends about ALS and the support he receives from the ALS Society of B.C.

Bruce was concerned  that not many people were aware of the disease ALS, even though the golf community was exposed to ALS when Bruce Allen, caddy for many golf pros including Tom Watson passed away from ALS.

Scott offered to golf from sunrise to sunset in honour of Bruce and his freind Terry Donaldson who also was living with ALS in the Comox Valley.

Jerry offered his support and rallied his fellow Rotarians to spread the word and to encourage donations towards patient services through the ALS Society of B.C.

In early September 2005, Scott set out at first light and golfed until darkness fell.  He golfed a staggering 288 holes, and raised over $5,000 for ALS.

Scott who was on the board of directors for the PGA of BC requested support from this organization to recruit other members of the PGA of BC to hold golfathons for ALS at their courses.  They agreed to do so.

This was the beginning of the PGA of BC Golfathon for ALS.

In 2012, Global TV News Anchor, Steve Darling added his support as the Ambassador of the PGA of BC Golfathon for ALS .

ALS can hit anyone, at any time, regardless of age, gender or ethnic origin.  The average life expectancy after diagnosis is two to five years.  Support equipment costs an average of $137,000 per patient; nursing and/or home care costs are up to 10 times that amount.

PGA of B.C. Golf A Thon for ALS are the recipients of: